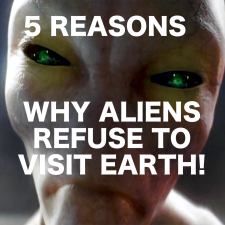 Ever wonder why intelligent life from other planets has failed to pay us a visit yet? It’s simple—they’re terrified of us. Here are just five obvious reasons why we won’t be getting any surprise extra-terrestrial visits in the near future.

This post was published by Theo Cage. Check out his latest thriller novel, GHOST OF A GIRL on AMAZON.  “Holy cow! I picked it up and started reading, and now I don’t want to do anything else! Great story . . .” Amazon reader.