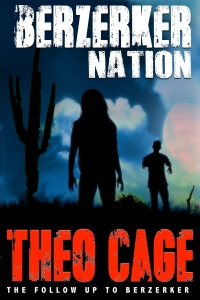 An excerpt from the upcoming thriller!

One thousand feet above the desert floor, about to bank left for his return to Luke Air Force base near Maricopa, Arizona, piloting a HS60S Knighthawk, Captain Fry caught site of a hinkey movement below. He had seen lone coyotes and herds of javelina pigs stirring up dust in the past, occasionally a hiker or a mountain biker following well-worn trails. But this creature was drawing a direct bead on the McDowell mountain range off in the distance. As straight as a laser line.

The animal looked pink, bipedal, its arms pumping and its legs covered in red.

He dropped down to five hundred feet through the rising thermals and was shocked to see the runner was a man, probably in his twenties, lean and muscled with a shaved head. The reason he looked pink was he was horribly sunburnt over most of his body. And he was naked. The man was running over harsh gravel and broken stones, weaving through clusters of spiny cholla and spiky aloe plants in his bare feet. Fry winced. He had hiked through those hills. Even in tough hiking boots, it was rough going.

The runner seemed unfazed by the rotor wash stirring up the sand and dust around him.

What would possess a man to race across one of the most hostile environments known, exposed to the elements, his feet a bloody pulp, burn blisters on his back and head?

Was the man insane? Crazy with the heat? It was over forty degrees today. Fry knew from experience anything can happen when the weather goes that wild.

He called in a visual report.

“I have a young male, heading two zero niner, off the trail, no clothes or shoes, running like he’s being chased by something. He looks burnt, body covered in boils. I swung past him, and he doesn’t appear to notice me. I’m at 120 NM North of base.

“You say he is being chased? By what?”

Then Fry paused to process another odd image. A quarter of a mile away he caught movement. To the north. He banked left and gently pulled up on the cyclical. Shit. It was another man running in the same direction.

“I have another sighting. A thousand yards back, but at least a thousand yards north of the first sighting. Same situation. Young male. Burnt. Naked. Not following a trail. Just running in a straight line.”

“Is he chasing the first male?”

“Possible. But it looks more like they are running parallel to each other. I see a third now.” Fry lifted the nose of the copter and ascended to one thousand feet. He scanned the horizon.

“Now I have a visual on at least ten runners.”

The men were running parallel to each other, some faster, some slower, all tracking straight lines across the desert floor like they were arrowing in on a single point.

“I’m not sure, but I think they’re converging.”

Then Fry saw the potential target. Up ahead about a quarter of a mile, a lone RV in the desert – a woman standing outside with what looked like two young children. She was cooking something over a camp stove, the smoke from the fire drifting up into the clear sky.

Despite being two thousand feet above the runners, Fry felt a shiver of fear skewer him to his cockpit.

The woman clearly had no idea what was coming.